Shower Base Repairs – Don’t Delay Getting That Crack Repaired 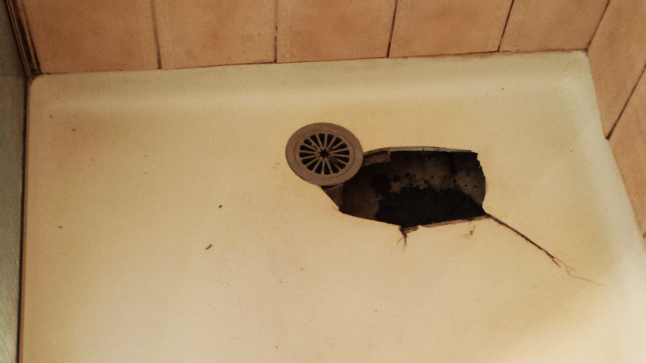 Have you noticed a crack forming in your shower base? If you have, it is of upmost priority that it is repaired sooner rather than later. Why? Because at any time that crack, big or small, may buckle under the pressure of your body weight causing your foot to fall through the shower base. This has the potential to result in serious lacerations and injuries to your foot and lower leg. Below are 2 reasons why you should to get that crack repaired quickly.

It only takes one wrong step or a slip in the shower to fall through a cracked shower base. Imagine kids jumping up and down in the shower having fun and suddenly it gives way. Or if a person carrying some extra weight steps in for a shower at the end of a long day.

Over time, constant pressure can force the crack to expand, but by the time we notice it can suddenly give way under pressure. At the same time, water is seeping through the crack onto floors and ceilings causing structural damage to our home.

If the shower base is sitting on top of a full floor, then the drop is only the depth of a mobile phone. But the edges of a shower base are razor sharp. Imagine the damage that could do to a foot or ankle as it goes down.

But it could be worse. Often Shower Care find the reason a shower base has cracked in the first place is because under it there are just floor joists! Nothing there to support it in the first place. This means an unsuspecting person could fall right through up to their knee or hip, and this could be potentially very serious.

Unfortunately, we once had a case where the customer had to visit the hospital and get stitches after their shower base gave way. A prompt shower base repair is the quickest prevention method.

The cost of repairing a cracked shower base is far less than replacing a whole shower base. The cost of a new shower base can be up to $6000 – and it’s at least $3000. As well as the cost, there is the much longer time it takes to replace the shower base to consider.

Repairing a crack is fast as it can be done all in one day and the materials used will make the shower base look as good as new and will strengthen the shower base (in fact usually stronger than new!). In contrast, replacing the entire shower base is usually a multi-day job and can be a hassle as tradespeople are in the house much longer and the use of the shower is restricted for a much longer time.

Please contact Arthur on 0418-818-857 or submit your query on the Contact Us page. He specialises in repairing cracked shower bases. Better safe than sorry and better low-cost than high-cost. In fact, he’s perfected the repair so well, he no longer installs new ones!